Home › General › What is the Gospel?

What is the Gospel? 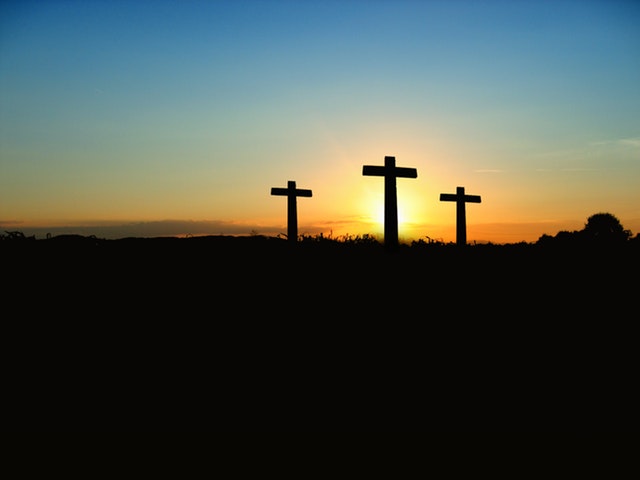 (Unless otherwise noted, all Scripture quotations are from the CSB.)

Have you ever had the experience of thinking you knew what a word meant, until someone asked you to define it? All of a sudden something you thought was clear and obvious turned out to be quite challenging to explain to someone else.

I had this experience in college, when one of my favorite professors opened our class by asking us, “What is the gospel?”

It’s a deceptively simple question, but our professor really kicked our critical-thinking skills into high gear. Any answer we proposed was tested against Scripture and given a slew of follow-up questions. Through this process, he proved to us the truth that when our explanations are unclear, it can mean our understanding is fuzzy at best or actually a misunderstanding at worst!

The gospel is often one of those things we think we understand. But if I asked you to explain what “the gospel” is, what would you say?

And more importantly, would it match what Scripture says?

The Gospel Made (Too) Simple

Many explanations of “the gospel” that we hear preached today are, in fact, oversimplified. For example, you might be tempted to say that the gospel is “the good news that Jesus died for your sins so you can go to heaven.”

Well, that is true, and it is part of the gospel.

But it’s not the whole story. There is more to it.

In fact, if we reduce the gospel to just this one aspect of the larger picture, we end up with three big problems:

#1: It makes the gospel “me-centered,” leaving out the fact that the gospel is good news for not just individuals, but communities and even the whole of creation!

#2: It makes the gospel nothing more than a “get-out-of-hell-free” transaction. Then the response we expect is a transactional one: Sign the dotted line; believe this one fact; pray this one prayer — and then you’re good to go! Why bother with discipleship or a changed life or church involvement?

#3: It doesn’t do justice to the biblical picture of the gospel. When Jesus and the apostles described the content of the gospel, it involved much more than just the atonement or justification by faith (though those are certainly included!).

Plus, if all the gospel entailed was, “You sinned; Jesus died for your sins; believe in him and you’ll go to heaven,” then why do we need anything between Genesis 3 and Jesus’ crucifixion? What purpose did the entire history of Israel in the Old Testament serve?

We need to keep in mind that while justification by God’s grace through faith in Jesus’ atoning death is 100% true and important, it is not the content of the gospel. Rather, it is what happens when we respond rightly to the gospel.

Justification is an effect of the gospel. And there are other effects that are just as important (like the indwelling of the Holy Spirit, and release from the powers of sin and darkness, and incorporation into the body of Christ, etc.).

So then, what is the gospel?

In 1 Corinthians 15:1-8, Paul summarizes the gospel that he passed along to his churches:

“Now I want to make clear for you, brothers and sisters, the gospel I preached to you, which you received, on which you have taken your stand and by which you are being saved, if you hold to the message I preached to you—unless you believed in vain. For I passed on to you as most important what I also received: that Christ died for our sins according to the Scriptures, that he was buried, that he was raised on the third day according to the Scriptures, and that he appeared to Cephas, then to the Twelve. Then he appeared to over five hundred brothers and sisters at one time; most of them are still alive, but some have fallen asleep. Then he appeared to James, then to all the apostles. Last of all, as to one born at the wrong time, he also appeared to me.”

Notice how much historical detail is in this description! Paul spends a lot of time talking about witnesses to Jesus’ resurrection. He mentions that Jesus died for our sins (there’s that part we talked about), but then he goes on to talk about the historical facts of Jesus’ burial and resurrection to glory.

And more than once Paul stresses that all of this happened “according to the Scriptures” (talking about the Old Testament). The biblical story of Israel and the promises God made to them were being fulfilled in Jesus!

Putting all this together: For Paul, the gospel was first and foremost an announcement of the historical events involving Jesus of Nazareth. And these weren’t just any events, happening to any ol’ person. No, this was the news that Jesus had fulfilled God’s plan and become the long-awaited King.

This makes sense when we consider the original meaning of the word “gospel.” The Greek word translated “gospel” (euangelion) literally means “good news.” It was a report of events; an announcement that something important and exciting had happened.

And in the first-century Roman Empire when Jesus lived and the New Testament was written, euangelion was a very politically-charged term. It often referred to an imperial proclamation. “Good news! The emperor has had an heir!” “Good news! Caesar has conquered another land!”

For the earliest Christ-followers to proclaim a “gospel” about Jesus the “Christ” (a title that meant “anointed king”) was a very politically-subversive message. They were announcing the reign of someone other than the Roman emperor.

And that’s exactly what Paul was proclaiming: that Jesus, through his life, death, and resurrection, had become the promised King (the “Christ”) that the Hebrew Scriptures were expecting.

This is why, in Romans 1:1-5, Paul explains the gospel as the story of how Jesus was the Messiah, the coming King, who fulfilled the story of Israel. He writes about

“the gospel of God—which he promised beforehand through his prophets in the Holy Scriptures— concerning his Son, Jesus Christ our Lord, who was a descendant of David according to the flesh and was appointed to be the powerful Son of God according to the Spirit of holiness by the resurrection of the dead. Through him we have received grace and apostleship to bring about the obedience of faith for the sake of his name among all the Gentiles, including you who are also called by Jesus Christ.”

A few verses later, in Romans 1:16, Paul says that the gospel “is the power of God for salvation to everyone who believes.” But since he’s already introduced the basic content of the gospel in verses 1-6, here he’s explaining its effect — that is, what the gospel accomplishes (and therefore why he’s not ashamed of it). The gospel is good news because it is a saving story.

The reason all of this is so vital, so crucial when it comes to explaining the gospel, is because it means Jesus and Paul preached the same gospel. Because they both announced the good news that God’s kingdom — his rule on earth, his blessing, everything that we lost in Genesis 3-11 — was being restored in and through Jesus the King!

The Good News of the Kingdom

Notice that the first time the gospel is mentioned in the New Testament, it is most decidedly not “Jesus died for your sins.” Rather, we’re told that Jesus went about “preaching the good news of the kingdom” (Matthew 9:35). Mark’s Gospel says that Jesus proclaimed “the good news of God: ‘The time is fulfilled, and the kingdom of God has come near. Repent and believe the good news!’” (Mark 1:14-15).

In other words, Jesus was announcing that the reign of God was being restored to this fallen world. All the promises God had made to Israel in the Old Testament — especially his promise to provide an heir to King David who would unite all humanity and restore God’s blessing to earth — were about to be fulfilled.

And through the things Jesus did — performing miracles by the Spirit of God; forgiving people’s sins; casting out the powers of darkness; gathering a community of followers; interpreting God’s law for a new age — Jesus made absolutely clear that he was the promised King of that kingdom! In his presence, the kingdom was present. Good news!

But to bring in that kingdom, Jesus had to offer himself as the sacrifice that would initiate the new covenant (see Mark 14:24-25). He had to fulfill the prophecies that the Servant of the Lord would suffer for the sins of his people (see Isaiah 52:13-53:12). He had to do away with the curse that the Law of Moses proclaimed on disobedient Israel so that blessing could come to all nations (see Deuteronomy 28-30; Galatians 3:10-14).

In other words, Jesus had to die for our sins on the cross so that the kingdom could come. And he had to rise again to prove he was indeed the Son of God, the promised King — i.e., so he could reign. So that it would in fact be good news.

The gospel is the story of how Jesus became the saving King.

And this is what the apostle Paul preached, as well. A lot of people question why Jesus doesn’t seem to have taught the “gospel of justification by faith” that Paul preached, but that only proves they haven’t really understood the gospel Paul actually preached.

Because it’s the same good news, and it’s all about Jesus. Jesus is King.

The gospel is the good news that Jesus has begun to reign. It’s also the story of how he has taken care of our sins through his death and resurrection, and of how he is now reigning from heaven and bringing about his kingdom in and through the church. And it’s also the promise that one day he is going to return physically to finish what he started and complete his reign here on earth, resurrecting his people from death and renewing the whole cosmos!

If we look at the gospel in this way, as this bigger story of Jesus’ present and future reign, how might that change how we think about things like faith, repentance, salvation, and the Christian life?

How should it affect what we say is the proper response to the gospel?

After all, the right way to respond to a king is with allegiance. With a profession of loyalty, trust in his power, and a life of obedience. As Paul puts it in Romans 10:9, “If you confess with your mouth, ‘Jesus is Lord,’ and believe in your heart that God raised him from the dead, you will be saved.”

Wouldn’t this focus on Jesus’ kingship help us make sense of why Jesus can call us to not only believe in who he is (John 6:29) but also obey what he commands (Matthew 7:21-27)? A gospel centered on Jesus’ kingship unites the biblical threads of faith, faithfulness, and the life of discipleship we are called to.

Now more than ever, the church needs to recover the gospel the New Testament teaches. The gospel that Jesus, Paul, and the other apostles preached. The gospel that not only gives us hope and new life, but also summons us to take up our crosses and follow our crucified, resurrected, ascended, and coming King.

And for a summary in video form, see McKnight’s lecture, “Did Jesus Preach the Gospel?”

Like Loading...
‹ What Are Spiritual Gifts, and How Do I Discover Mine?
A Book You Need to Know About: Salvation By Allegiance Alone ›

Tags: Jesus and Paul, justification, Kingdom of God, Scot McKnight, summary of the gospel, the gospel, The King Jesus Gospel, what is the gospel?