The Spiral of Spiritual Growth 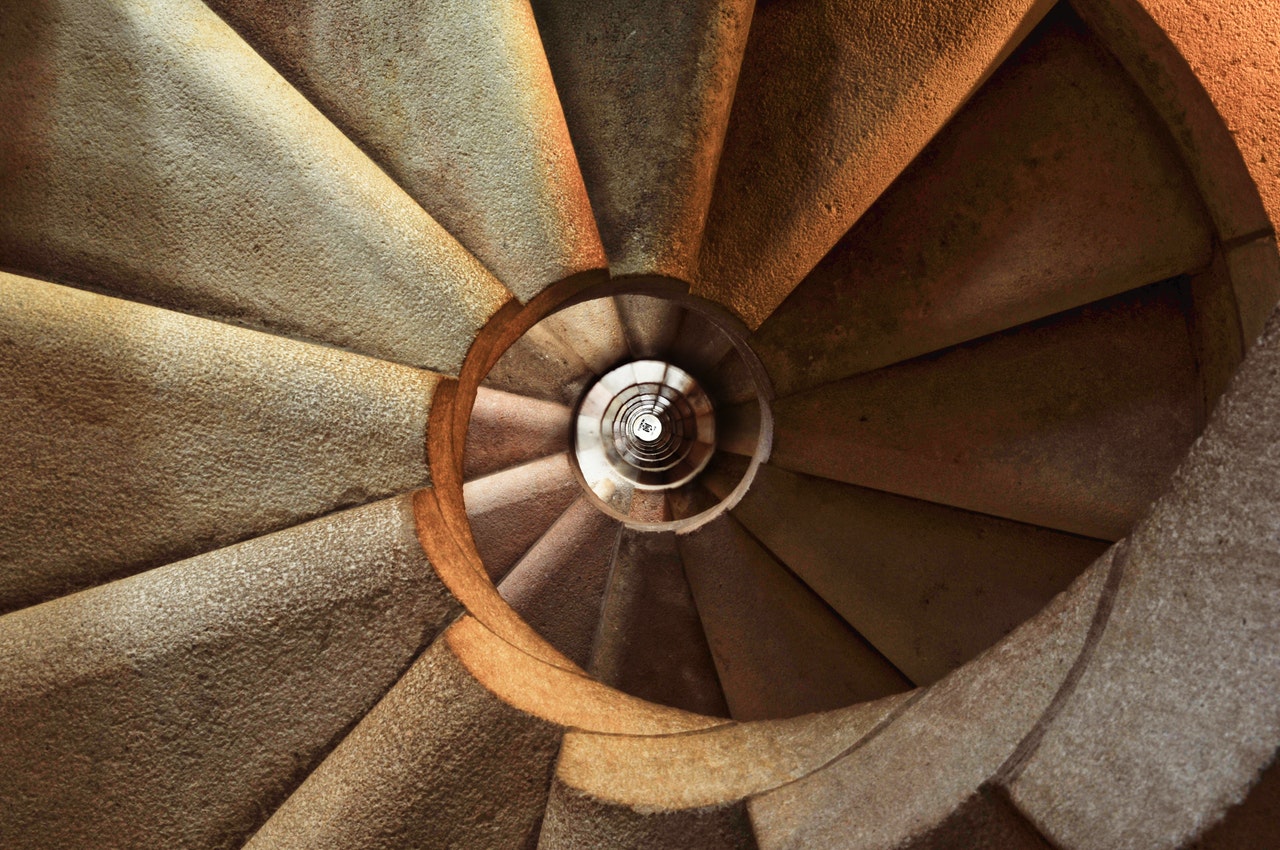 “Why am I having the same struggle over and over again?”

“I thought I’d have been past this by now.”

“Is God ever going to fix this?”

The more I’ve ministered to young people, the more I’ve encountered statements like the ones above. If you’ve ever tried to make progress in your spiritual life, chances are you can relate to these sentiments. You’ve wanted to grow in your faith, but you keep bumping up against the same struggles, problems, or areas of sin in your life. And you start to wonder, Will this ever get better? Have I even grown at all?

I’ve been in the same boat myself (more often than I’d like!). To this day, there are recurring areas of weakness that I wish God would just instantly purge out of my life. When those moments come up, and I’m face-to-face with an old struggle, there are usually two temptations:

1. Get angry with God and blame him for not fixing my problem.
2. Begin to accept the weakness as part of my identity.

Both of those are very dangerous alternatives. The first one assumes that God is supposed to do all the work in our spiritual growth, leaving out the part where we have a genuine, growing relationship with him.

The second one gives up on growth altogether. It overlooks the reality that God does help us move forward, even if it can be a painstakingly gradual process. The people who fall into this trap begin to say things like, “I’ll never change”; “This is just who I am”; “It’s just my nature.”

The Old vs. The New

The reality is, yes, it is in our human nature to sin and to have areas of weakness. But at the same time, if you are a believer in Christ, God also gives you a new nature that has the capacity for growth and spiritual maturity – assuming you continue to utilize the means God intends us to use for growth, and continue to resist the pull of your old ways.

Consider what the apostle Paul writes:

“. . . you have put off the old self with its practices and have put on the new self. You are being renewed in knowledge according to the image of your Creator.” (Colossians 3:9-10, CSB)

Notice the present tense: You are being renewed. It’s a process. You have been transformed by Jesus, but you are also continuing to be transformed to become more like him. You have a new nature, but you’re also still growing into it.

So, getting back to our original problem: What about those times when it sure doesn’t seem like we’re being renewed at all? When it seems more like we’re still the same old person we were before coming to faith?

Let me share a perspective that has helped me tremendously, and has also helped others I’ve shared it with.

Not a Straight Line, but a Spiral

A lot of people tend to picture their spiritual growth as a linear progression – you move forward toward the goal, and there are ups and downs along the way, but the movement is always forward (or so we hope).

If you think this way, it’s only natural to get frustrated when you feel like you’re back into an old situation you thought you had left behind. It’s as if you’ve slid backwards down the line. I used to think this way, and I would so often feel like a failure – like I was back to square one.

But this idea of a linear progression is not actually the best way to think about growth. A better model is the one suggested by Christian psychologist Michael Mangis. He writes:

“We can think of spiritual growth not as a linear progression but as a cyclical process. It resembles a journey around a mountain. I come back to the same side of the mountain and see what is essentially the same view, except that now I see it from a different height and with greater clarity. Our growth is cyclical like that. It is not a ladder but a winding staircase. It is not a straight line but more like a helix. We need to purge our house of idols not once but repeatedly throughout our lives.”[1]

In other words, the reality is that you’re never the same person you used to be. You may be coming back to re-face old patterns or struggles, but you’ve still grown. Your spiritual path is more like an upward spiral than a straight line.

Sometimes, as we move forward and upward, God calls us back “around the mountain again,” as it were. But this time around you’re attacking the issue from a higher vantage point, because you’ve been moving further up in your walk with Jesus. And with each go-around, you’re ready for God to peel back even deeper layers of the sins that have been buried inside you for so long.

As Mangis goes on to say, the issue may be the same, but your level of maturity doesn’t necessarily have to be:

“Most of us have had the experience of facing some inner flaw such as a signature sin and feeling disappointed that we are back where we started. In frustration we say, ‘I thought I had already dealt with that.’ In reality we are not back at exactly the same place. We are dealing with the same issue, but from a different level of maturity.“[2]

We Grow By Grace, Not By Self-Will

Mangis’ concept of the spiral of spiritual growth has been immensely encouraging to me, since I have repeatedly wrestled with insecurity and self-doubt in the past. I would fall prey to the idea that unless I fixed all my issues and got over all my weaknesses, I could never please God.

But thankfully God revealed to me his great patience with me throughout the growing process. Rather than force me to clean up every area of my life before coming to him, he just wanted me to trust him. God has grace with me, but so often I didn’t have any grace with myself!

“But God proves his own love for us in that while we were still sinners, Christ died for us.” (Romans 5:8, CSB)

It was when I realized how freely God pours out his grace even before I’ve finished getting my act together that I was finally able to actually move forward and doubt myself less. And now, every time I brush up against insecurity again, I’m able to chip away at that sin to an even greater extent.

Looking at our spiritual journey as an upward spiral helps prevent us from putting so much pressure on ourselves to do all the work instantaneously. This isn’t at all to say that we don’t need to be making progress – we do. Our calling as Christians is always to take up our crosses daily and follow Jesus. But progress is cyclical, and it is gradual.

In fact, it takes an entire lifetime. In 1 John 3:2, we’re told that it’s only when we finally see Jesus face-to-face that we’ll be finished becoming totally like him. Progress is the order of the day on this side of eternity; perfection awaits us on the other side. Until then, we keep following and we keep growing.

And here’s one more truth to hold on to when you begin to feel discouraged: recognizing your repeated weaknesses is, in itself, a sign of maturity! Only a person who is growing spiritually and experiencing God’s grace in his or her life would be so concerned to move past recurring sin issues. An immature person would be content to try to justify or ignore them.

So the next time you re-encounter an old struggle, just remember: You’re not back to square one. You’re just making another pass around the mountain.