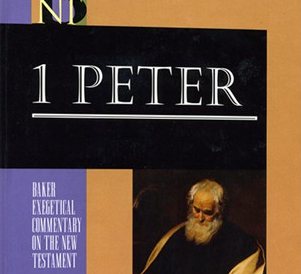 If you want to go deeper in your study of a book of the Bible, it’s important to have a few good commentaries at hand. The best ones will explain the nuances of the original language, introduce the historical circumstances behind the book, unpack the theological connections with other portions of Scripture, and offer good material for reflection, preaching, and application.

Any time I’m studying or teaching a biblical book, I make a point to compare as many of the major scholarly commentaries as I can, for my own benefit and so I can make reliable recommendations to you!

When it comes to 1 Peter, there are a number of good commentaries available. Scholarly discussion of 1 Peter often revolves around two key background matters: 1) authorship (whether the letter was actually written by the apostle Peter or was composed in his name after his death), and 2) audience (was it written to Jews or Gentiles, primarily?). A commentator’s conclusion on these two questions will inevitably shape their interpretation of 1 Peter.

Here are the top five commentaries I’ve found most helpful for studying and teaching 1 Peter:

This one is easily my personal favorite and first off the shelf. It’s a bit on the technical side, but still manages to be accessible to lay readers.

Jobes makes what is arguably the strongest case for the traditional view of Petrine authorship among recent commentaries, and argues that the apostle wrote to Jewish followers of Jesus who moved into Asia Minor as a result of Roman colonization efforts in the 50s C.E.

Jobes covers all the important exegetical details while at the same time offering great insights for preaching and teaching. Pastors and serious students of 1 Peter can’t afford to pass this one up.

Clowney’s book reads less like a traditional commentary and more like a series of sermons on 1 Peter. I enjoy using it as a supplement to Jobes, since Clowney offers many great quotes and reflections for preaching.

He writes from a Reformed perspective, holds the traditional view of authorship, and thinks Peter wrote mainly to Gentile Christians. Even where my own perspective differs, I appreciate Clowney’s reflections. He does a great job tying 1 Peter to other Scripture and bringing out the theological significance. Plus he’s just really pleasant to read!

Witherington’s commentaries are unique in that they focus especially on the literary and rhetorical character of the New Testament books, while also drawing out their theology. He sheds light on the rhetorical techniques Peter used to encourage his audience in the midst of their trials and persuade them toward holy living so they could be witnesses to the Gentiles.

Witherington upholds Petrine authorship and makes an extensive case for a primarily Jewish audience. This commentary is geared more towards scholars and academic students, but interested lay readers and pastors will find much benefit as well (not to mention it also covers 2 Peter!).

Achtemeier’s commentary in the Hermeneia series differs from the others on this list in that he believes 1 Peter is pseudonymous (written by someone other than the apostle Peter) between 80 and 100 C.E. While this may be jarring to more conservative readers (and I personally disagree with him), his commentary is still very much worth consulting.

I’ve found it to be one of the best when it comes to Greco-Roman historical background on 1 Peter, and his discussion of the type of persecution the epistle addresses is excellent. I’ve also found it helpful when it comes to questions of translation in the Greek. It is very much on the technical/scholarly side, but if you already have some exposure to academic New Testament studies you should definitely consult Achtemeier.

Edwards’ commentary doesn’t add much that is new or original to discussion of 1 Peter, but where he shines is in applying 1 Peter to contemporary life. The Story of God Bible Commentary series features in-depth, practical reflections after the comments on every passage (called “Live the Story”), and Edwards draws parallels between Peter’s words to his exiled audience and civil-rights issues that churches in America face today.

His commentary is useful for that reason alone, but his exegesis of 1 Peter also strikes a nice balance between being scholarly and pastoral. He sees Peter as the author and views the audience as mostly Gentile Christians. This one is a good value-buy for busy lay readers, pastors, and Sunday school teachers, but it isn’t quite as stellar as Jobes for matters of interpretation.

Many scholars credit John Elliott as being responsible for the recent resurgence of academic interest in 1 Peter (his academic articles on 1 Peter in the 1970s drew attention to the need for more research on this epistle), so I have to give him a shout-out. At over 900 pages, Elliott’s massive commentary is not for the faint of heart — to call it “encyclopedic” would not be an overstatement! It’s an amazing resource for serious scholars, even if others have since carried the conversation forward.

Elliott champions the view that Peter’s audience was composed of literal resident-aliens (not just spiritual/metaphorical exiles). He argues for pseudonymous authorship and sees the audience as mostly Gentile. (In my opinion, Jobes has done the best job of taking Elliott’s suggestion of literal exiles in a more plausible direction — Jewish colonists addressed by the apostle Peter himself.)

And those are my top picks on 1 Peter. Are there others not mentioned here that you’ve found helpful? If so, let me know in the comments!

Like Loading...
‹ Exploring Scripture: 1 Peter
No One Can Come to Jesus Unless the Father Draws Them: Two Views on Election in John 6 ›