Home › Theology › Does God Love Sinners, Or Does He Hate Them?

Does God Love Sinners, Or Does He Hate Them? 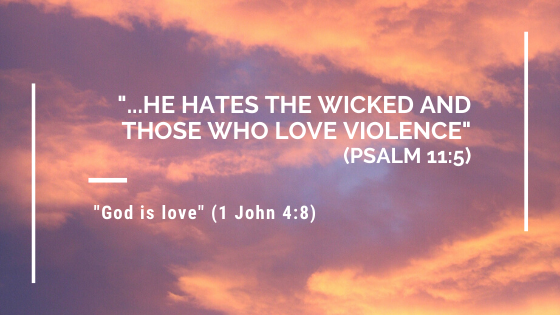 The Bible tells us that “God is love” (1 John 4:8). As Christians, we believe that God loves all of his human creations, despite their sin, and that he desires for everyone to repent and be saved (2 Peter 3:9). As Romans 5:8 famously declares, “God proves his own love for us in that while we were still sinners, Christ died for us.” You may even have heard the popular saying, “God hates sin but loves the sinner.”

But at the same time, the Bible elsewhere says that God “abhors the sinner” (Psalm 5:5), that he “hates the wicked and those who love violence” (Psalm 11:5)! There are passages that speak of God’s wrath being upon people because of their sin. So which is it? Does God love sinners and want to save them, or does he hate them?

Understandably, this question makes many people’s heads spin. And how we try to answer it says a lot about our approach to Scripture and its complex presentation of God’s relationship to humanity.

So is this a contradiction? Or can both statements be true?

Right off the bat, there are a few potential answers to this conundrum that we can dismiss as unhelpful.

The first (and most foolish) would be to pit the Old and New Testaments against each other. It simply will not do to say that the Old Testament depicts a wrathful God who hates, while the New Testament reveals a God who is gracious and loving. Even a cursory reading of Scripture will show that this theory doesn’t match the facts.

A less oversimplified, but still similar, option would be to say that the Bible records the ancient mindset of its human authors, even preserving sometimes contradictory ideas. Those verses in Psalms that speak of God’s hatred for the wicked reflect the anguish of the persecuted psalmists, whereas other passages reflect more soberly on the truth of God’s love for sinners. Some would claim that these latter parts of Scripture that dwell on God’s mercy are closer to the truth we see in Jesus than those that dwell on his wrath.

There is some truth to this view, at least insofar as we should not neglect the human side of Scripture. The Psalms particularly, being poetry, do communicate in strongly emotive language. But where this answer becomes problematic is when we try to take account of the divine side of the equation.

For those of us who accept that all Scripture is inspired by God (2 Timothy 3:16), it raises some very thorny issues to argue that the Psalms or other texts in Scripture are flat-out wrong. Even if we say that the biblical authors were expressing their feelings truthfully, I take issue with the notion that the Spirit of Truth inspired his human agents to express things about God that are false. Behind all the emotive language and poetic metaphors, there is still something accurate being claimed about God.

Fortunately there is a better answer. And what it boils down to is dismissing the idea that love and hate cannot coexist in the same person. It’s a false dichotomy. And it overlooks the different connotations that words like “love” and “hate” can have in different contexts.

Let’s start with Jesus (always a reasonable idea, right?). In one of his more memorable and controversial teachings, he says, “If anyone comes to me and does not hate father and mother, wife and children, brothers and sisters—yes, even their own life—such a person cannot be my disciple” (Luke 14:26).

But wait a minute! This is the same Jesus who elsewhere promotes the command that you should honor your father and mother (Luke 18:20), and who teaches that we should love everyone — even our enemies (Luke 6:27)!

A common-sense interpretation of Luke 14:26 recognizes that when Jesus says we should hate father, mother, etc., he is stressing is that one’s love for him should be so strong that love for anyone else looks like hate by comparison. It’s not a matter of either-or, but of both-and. What seems paradoxical on the surface actually turns out to be complementary.

Consider also that one of the nuances of the Hebrew terminology for “hate” is the notion of rejecting rather than approving. In this sense, the biblical concept of hatred can have more to do with evaluation rather than with emotion.

This is seen most clearly when the Bible talks of how God “loved” Jacob but “hated” Esau (Malachi 1:2-3; Romans 9:13). The terms for love and hate here have very little to do with emotion and everything to do with God choosing which of the brothers would carry on his covenant lineage. God’s “hating” — or rejection — of Esau as covenant representative doesn’t mean that he didn’t still richly bless Esau (see Genesis 33:9; 36).

This sense of “hate” must be kept in mind when we read the Psalms, in particular, since the truth they are emphasizing so vividly is that God approves of the righteous and disapproves of the wicked. Thus, the righteous can have hope that they will be vindicated. God will not allow the wicked to get away with their crimes forever. This kind of hatred doesn’t mean that God can’t also desire that the wicked would repent (see Psalm 2:10-12), or that he feels no love for them at the same time.

An analogy may help us here. Consider how love and hate could potentially exist side-by-side in a parent who has been spurned and disowned by their grown child who has decided to become a criminal. The parent still wants the best for their child, and would desire more than anything that the child abandon their criminal lifestyle and seek reconciliation. But so long as the child continues to be a danger to the family, society, and even themselves, the parent cannot approve of the child or welcome them back into their home. And so long as the child continues in their course, that parent may well hate the person their beloved child has become.

No analogy is perfect, but hopefully this one illustrates that love and hate are not always mutually-exclusive.

So yes, God does love sinners, in the sense that he wants what’s best for them, and that he extends a measure of patience to them, and (most importantly) he gave his Son, Jesus Christ, for them so they could have a way to be reconciled to him. He loves them as a perfect parent would still love their estranged child.

But compared to God’s love for goodness; compared to his commitment to justice; compared to his decision that everyone’s destiny revolve around their response to Christ, God can truly be said to hate the sinner. He hates them in the sense that he utterly disapproves of their current identity and conduct. And unless they accept his terms of reconciliation, he will ultimately reject them in the final judgment.

So it’s not entirely untrue to say, “God hates the sin but loves the sinner.” But it’s probably a bit too oversimplified. Much depends on whether we properly explain the sense in which God loves the sinner. It is not the wishy-washy, tolerant-of-everything definition of “love” our current culture so widely promotes. This is where a biblical understanding of God’s love and his hatred serves as a sobering corrective to our flattened-out, popular notions.